Eight Hawks of the Royal Saudi Air Force's display team, the Saudi Hawks, together with their C-130H-30 Hercules support aircraft, made a technical stop at Malta IAP this morning while on their way to Tunisia for International Aerospace & Exhibition at Djerba–Zarzis IAP. (28-Feb-2020)

Air Malta and Qatar Airways are pleased to announce that they signed a comprehensive code-share agreement.  The agreement reinforces Air Malta’s drive to expand its network and extend its reach.  It also shows Qatar Airways’ long-term commitment to Maltese passengers and to boosting tourism to the Islands.  Sales will start from today with the first code-share flights to operate from Mar 9th. The code-share agreement increases Malta's connectivity with Africa, the Middle East, Australia and Asia by enabling Air Malta's passengers to travel on Qatar Airways' flights between Malta, Doha and onward to more than 60 destinations.  Air Malta will place its code and flight numbers on several of these Qatar flights thereby allowing the Maltese Airline to participate in these markets not only to and from Malta but also connecting to and from other destinations that it serves. Qatar Airways' passengers will also benefit from greater access to Malta and to Air Malta's extensive Mediterranean network.  Code-share destinations include Cagliari, Palermo and Catania. Qatar Airways Group Chief Executive, His Excellency Mr A. Al Baker, said: "When we launched services to Malta in June 2019, I stated this was just the beginning of our long term commitment to boosting trade and tourism between our two countries. This agreement with Air Malta will provide significant benefits to both airlines and thousands of passengers, expanding both of our networks and setting the foundation to further enhance cooperation in other fields in the future." Air Malta Chief Executive, Captain C. Chetcuti, said: "This agreement is yet another milestone for Air Malta in its growth strategy and widening of its code-sharing network.  It was a natural step for us after Qatar Airways launched direct scheduled services to our Islands and the successful cooperation on pilot training.  Both Air Malta and Qatar Airways share the same quality service commitment towards their customers and through this code-share agreement we are enhancing our cooperation to the benefit of our mutual customers."  (Source: Air Malta, 26-Feb-2020)
Posted by maltaspotting

A Ryanair Boeing 737-800 (EI-DAF) operating flight FR-8853, from Londson-Stansted (U.K.) to Malta Int'l Airport, had to divert to Marseille (France) yesterday evening due to a technical issue with the aircraft.  The flight then continued to Malta, with a replacement B738 (EI-EMK), reaching destination at 0204lt, with a delay of nearly 5-hrs.  (Source: flightradar24.com and Malta IAP, 12-Feb-2020)
Posted by maltaspotting

Air Malta flights to London cancelled because of weather

Air Malta flights to London have been cancelled today because of adverse weather conditions caused by Storm Ciara, affecting the U.K. and Western Europe.

Air Malta said in a statement in the afternoon passengers were being offered free re-bookings to the same destination or full refund of ticket.

The year was off to a strong start for Malta Int'l Airport, with January traffic growing by a noteworthy 14.2% to surpass the 400,000-passenger mark for the first time.

418,096 passengers passed through Malta IAP during the first month of the year; a total comparable to the traffic handled by the airport during its peak summer month ten years ago.

Traffic peaked on the fourth day of January – reaching almost 21,000 passenger movements – as many headed back home at the end of the festive period.

Seat capacity increased by 11.3%, while seat load factor, which measures seat occupancy on board flights to and from Malta IAP, gained 1.8% to reach 71%.

The French market’s phenomenal growth rate can be partly attributed to the fact that the Lyon and Nantes routes are being operated in the winter months for the first time.  (Source: maltairport.com, 7-Feb-2020)
Posted by maltaspotting

The nose wheel of a Tecnam P2002-JF (9H-PIC), belonging to the European Pilot Academy, retracted while taxiing away shortly after landing on RWY 23 at Malta Int'l Airport.  The incident happened around 1000lt and the airport's fire and rescue service team was on the scene within seconds.  The pilot was the only person aboard at the time and was not hurt.  Malta IAP's operations on the main runway 13/31 were not effected, the flights schedule continued normally.  (Source: Malta IAP & Times of Malta, 1-Feb-2020) 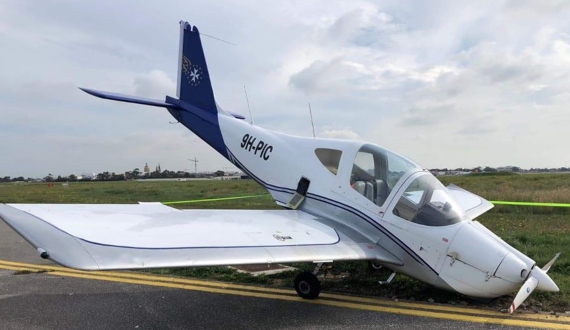